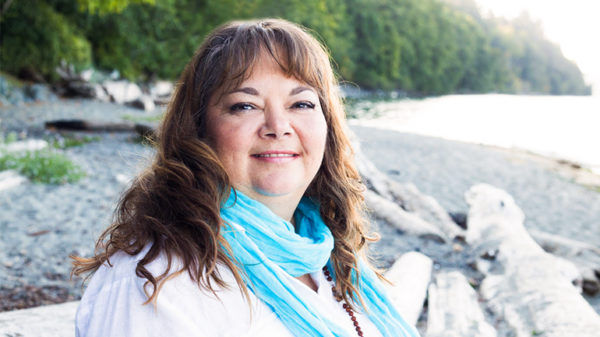 Monique Gray Smith affectionately refers to him as “the little boy.” In 2015, while on a speaking engagement in Mission, BC, the author crossed paths with the boy who left a profound impression.

“I watched this little guy who was about four-years-old,” said Smith. “He came running into the room with his eyes darting around searching for something.”

The room the boy had just run into, said Smith, was a flurry of activity as the session she was participating in broke for lunch. Food was being brought out and shared, while parents and staff mingled and children played in the next room. The little boy kept searching the room until he finally saw who he was looking for.

“He called out ‘kôhkom!,'” (meaning grandmother in Plains Cree) and ran to his grandmother. Smith said she will never forget how the pair faced each other. “The grandmother gently held her grandson’s face in her hands and looked at him with so much love,” said Smith, adding that with just a look the little boy’s body relaxed.

“I was seeing his heart fill with happiness,” said Smith.

Today, the little boy’s name remains a mystery to Smith, but witnessing that powerful moment inspired her to write her latest children’s book My Heart Fills with Happiness/sâkaskinêw nitêh miywêyihtamowin ohci. Illustrated by renowned Indigenous artist Julie Flett, the pages charmingly capture and deliver a series of simple life moments – from the gaze of a loved one, to music-making and dancing – that can bring feelings of comfort, joy and happiness to almost anyone. 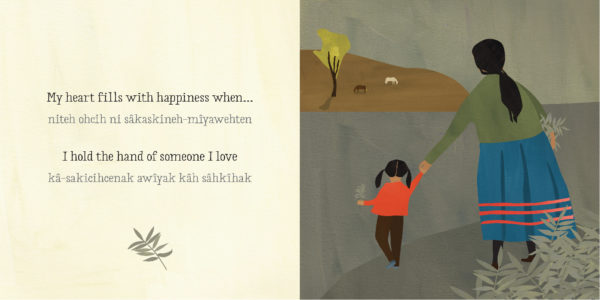 First released in 2016, the book was translated into Plains Cree last year and republished to have the Indigenous text accompany the French and English language versions of the book. This fall, more than 550,000 children across Canada will receive a copy to take home through the 2019 TD Grade One Book Giveaway.

Organized in association with the Canadian Children’s Book Centre, the TD Grade One Book Giveaway is the largest free-book distribution program to school-aged children in Canada. “It’s the first time a population of children will receive a gift on this mass level with an Indigenous language front and centre and woven all the way through,” said Smith. “To me, that is so special.”

The book serves as a reminder to carve out time to appreciate those basic moments and sensations in the human experience, particularly in a world where computerized screens and handheld devices demand much attention.

“Happiness is found in the rich relationships we have with human beings, the earth, culture and language,” said Smith. “It’s a universal message for both children and adults who may be reading this book to them at bedtime.”

The last page of the book directly asks the reader to reflect on what fills their heart with happiness.

“I want it to be a conversation between the adult and child so that both can go to bed with joyful thoughts,” said Smith.

The book also contributes to an ongoing global dialogue. The UN declared 2019 as the International Year of Indigenous Languages to recognize the continuous decline of such languages around the world. Through its illustrations, Plains Cree translation and overall theme, Smith hopes My Heart Fills with Happiness prompts further discussion around the importance of preserving and promoting Indigenous languages and culture, especially here in Canada.

“Having the book translated into Plains Cree feels like a sacred gift,” said Smith, fighting back tears. “It is so powerful when an Indigenous child can see an image of themselves and their language on the cover and within the pages of the book, especially if they’re Cree. It also provides positive exposure of our culture to non-Indigenous readers. That is equally important.”

Asked to name one experience that fills her own heart with happiness, Smith exhales with a smile.

“Walking barefoot on the grass,” she said. “Come the month of May, when the grass is warm enough to walk on it without shoes and socks…it’s heaven.”

The permalink for this story is:
https://nationtalk.ca/story/childrens-book-about-happiness-aims-to-uplift-indigenous-language-and-culture