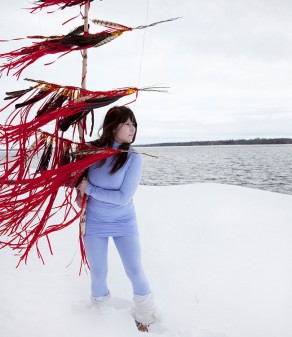 exhibition features works by some of the country’s leading Indigenous artists including Rebecca Belmore, Scott Benesiinaabandan
, Faye HeavyShield, Qavavau Manumie, Meryl McMaster, Nadia Myre, and Jeffrey Thomas. The works of the seven artists in this exhibition portray individual ideas of m
otion and movement; together, they are testimony to the dynamism and persistence of Indigenous cultures today and into the future. The exhibition I:ke – I have motion opens to the public on Tuesday, September 23 at A Space Gallery.
The NFB/ imagineNATIVE Digital Partnership returns with its third interactive incarnation, Ice Fishing, by Newfoundland artist Jordan Bennett. Virtual ice fishing holes turn the gallery floor into a fishing ground for story. Immersive audio, video, programmatic animation and photography round out this unique storytelling experiment that brings ice fishing in rural Newfoundland to an urban gallery environment. With the main exhibition at Trinity Square Video and satellite elements at the TIFF Bell Lightbox and 401 Richmond lobby spaces, this exciting exhibition will engage audiences in a way like never before. Ice Fishing opens to the public on Wednesday, October 22 at Trinity Square Video.
Next on the Art Crawl will be RECAST by Bev Koski, Christian Chapman, including new edited works by Sébastien Aubin and Caroline Monnet, Marja Bål Nango and Nathan Young. This exhibition, curated by Lisa Myers, presents Christian Chapman’s video collaboration and Bev Koski’s photographic series to consider how meaning shifts with the recasting of narrative and objects. RECAST opens to the public on Friday, October 24 at Gallery 44.
Discover Trove: Unearthing the Embargo Collective II at the WARC Gallery curated by Rebecca Baird. Featuring works by Alethea Arnaquq-Baril, Zoe Leigh Hopkins, Lisa Jackson, Caroline Monnet and Elle-Máijá Tailfeathers, Trove traverses the past and future creative visions of the five Indigenous female filmmakers who are part of the Embargo Collective II, set to premiere their new commissioned films at the Closing Night Gala on October 26. Trove opens to the public on Saturday, October 18 at WARC Gallery.
Ending the evening will be the first New Media Multi-Platform Showcase, an artist talk showcasing some of the cutting edge new media works in our the imagineNATIVE programming, including works by the Blackout Collective, Lily Ginnish-LaValley, Sean Muir, Jude Norris, Cheyenne Scott, Theresa Stevenson, and the Skins 4.0 Collective.
The imagineNATIVE Film + Media Arts Festival is the world’s largest Indigenous festival showcasing innovation in film, video, radio and new media. The Festival presents the most compelling and distinctive works from Canada and around the globe, reflecting the diversity of the world’s Indigenous nations and illustrating the vitality and excellence of Native art and culture in contemporary media.
The 15th annual imagineNATIVE Film + Media Arts Festival will be held October 22-26, 2014

The permalink for this story is:
https://nationtalk.ca/story/imaginenative-film-media-arts-festival-presenting-sponsor-bell-media-announces-exhibitions-and-art-crawl