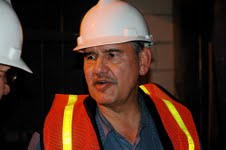 Vancouver, BC January 23, 2013 – P. Jerry Asp will receive the Queen Elizabeth II Diamond Jubilee Medal, March 5, 2013, in Toronto, for his contributions to the inclusion and training of Aboriginal People in the mining industry.

Asp, co-founder and Vice President of the Canadian Aboriginal Minerals Association (CAMA) and President, C3 Alliance Corp, was nominated by the Prospectors and Developers Association of Canada (PDAC) for this award. Asp received the 2011 PDAC Skookum Jim award for Aboriginal Achievement in the mineral industry.

“I am very pleased to see that Jerry Asp has been awarded the QE II Diamond Jubilee Medal for his leadership and efforts in the training and inclusion of Aboriginal Peoples in the resource industry,” says  Robert Quartermain, President & Chief Executive Officer, Pretium Resources Inc. “Since starting his own career in the industry, and the subsequent establishment of the TNDC, and many other initiatives, Jerry has worked tirelessly to promote the benefits of engaging in cooperative business relationships between Aboriginal communities and industry partners.”

Asp, former Chief of the Tahltan First Nation, BC, has devoted his working career to creating opportunities and encouraging Aboriginal Peoples to participate in the mining industry.

He founded the Tahltan Nation Development Corporation (TNDC) in 1985 to build houses on his reserve, and to create training and employment opportunities for the Tahltan Nation. As President of TNDC, in 1987, he negotiated the first Impact and Benefit Agreement (IBA) in British Columbia, with North American Metals at the Golden Bear Mine, which opened doors for employment and training at the mine.

Asp continued to push for development opportunities and by 1990, Spatsizi Construction, the construction division of TNDC, was the largest native owned and operated heavy construction company in Western Canada. TNDC also started a catering division in 1990 and by 1996 had trained chefs, prep cooks, bakers, and camp managers.

He is a member of the BC Industrial Training Authority and sits on their Aboriginal Apprenticeship Advisory Board. In three years, this advisory board has raised the number of Aboriginal apprentices, in BC, from approximately 600 to over 1800 indentured apprentices.

As a member of the BC Human Resource Task Force, Asp was instrumental in starting the BC Aboriginal Mine Training Association and is also the Chair of the Yukon Mine Training Association. “Jerry Asp has been a valued and strong participant of the BC Mining HR Task Force since its inception. Jerry can always be counted on to provide practical and candid input into the work that we do based on his considerable and varied experiences. The strength of the Task Force has been due to the breadth of organizations represented and the individual people who represent them being able to collaboratively work together. Jerry has certainly been one of the leaders in that regard. On behalf of the Task Force I am delighted to see this kind of recognition for Jerry’s accomplishments,” says Dave Bazowski, Chair, BC Mining HR Task Force

It is for his pioneering efforts to ensure Aboriginal Peoples are aware of and prepared to develop rewarding careers in the mining industry that he is being awarded the Queen Elizabeth II Diamond Jubilee Medal.

The Diamond Jubilee Medal was created to mark the 60th anniversary of her Majesty Queen Elizabeth II’s succession to the Throne as Queen of Canada. To be eligible for this medal, a person must be a Canadian citizen or permanent resident of Canada. They must have made a significant contribution to a particular province, territory, region or community within Canada, or an achievement abroad that brings credit to Canada.

Media inquiries may be directed to:

The permalink for this story is:
https://nationtalk.ca/story/lifetime-advocate-for-inclusion-of-aboriginal-peoples-in-mining-industry-awarded-queen-elizabeth-ii-diamond-jubilee-medal