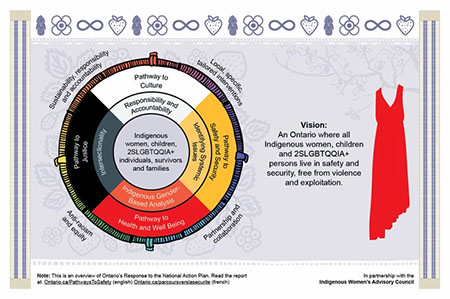 Thunder Bay, ON – The Ontario Native Women’s Association (ONWA) and Ganohkwasra Family Assault Support Services acknowledges and honours the thousands of Indigenous women and girls taken from us by violence. Many of these women were mothers whose children have now been forced to navigate their lives without them. And so, we also honour and acknowledge the children, families, friends, and loved ones of Missing and Murdered Indigenous Women and Girls (MMIWG).

ONWA and Ganohkwasra also recognizes the awareness raising efforts of grassroots organizers, community activists, and Indigenous women’s organizations who took up their leadership roles and responsibilities and successfully advocated for the National Inquiry. The work that collectively needs to be done is to prevent all forms of violence for future generations of Indigenous women and girls.

“As the bearers of the future generations of our peoples, Indigenous women, mothers, are physically and symbolically the source of resistance against those who would see us disappear.” – Dr. Dawn Lavell-Harvard, Board President, ONWA

A wholistic, community-based, cross-jurisdictional approach is key to ending this tragedy. Partnership with the Indigenous Women’s Advisory Council and Indigenous partners, alongside engagement with Indigenous women, survivors and families was fundamental to developing Ontario’s strategy, and will be integral to its implementation.

“So many initiatives that have the power to lead our Indigenous Women and Girls to a safe and secure outcome are revealed in this document being released today.” – Sandra Montour, Co-Chair, Indigenous Women’s Advisory Council

The Indigenous Women’s Advisory Council has developed a placemat that is a companion to Ontario’s Response. The placemat illustrates the structure and recommendations of Ontario’s MMIWG response, while also incorporating cultural elements. To view the placemat go to: www.onwa.ca/learning-resources-mmiwg

The Ontario Native Women’s Association and Ganohkwasra Family Assault Support Services look forward to continuing to work as a collective force. Sharing a vision where Indigenous women and girls live in safety and security, free from violence and exploitation, supported by accountable and ongoing systemic and structural change in the province.

To view the report go to: Ontario.ca/PathwaysToSafety (English), or Ontario.ca/parcoursverslasecurite (French).

The permalink for this story is:
https://nationtalk.ca/story/ontario-government-launches-pathways-to-safety