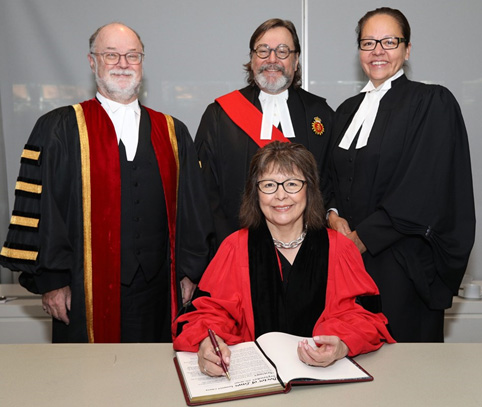 OTTAWA, ON – The Indigenous Bar Association (IBA) is delighted to congratulate Delia Opekokew, who was conferred an honourary Doctor of Laws (LLD) by the Law Society of Ontario this past Wednesday, September 25, 2019.

Delia is member of the Canoe Lake Cree First Nation in Saskatchewan and is the first Indigenous woman to be called to the Ontario and Saskatchewan Bars in 1979 and 1983, respectively.

In past interviews she has noted her parents strong influence – they grounded her work and encouraged her feminist approach. Her career began when she was a clerk typist doing work for the Federation of Saskatchewan Indian Nations (FSIN). She was hired by FSIN in a community organizer role where she met with politicians such as Prime Minister Pierre Trudeau to discuss Aboriginal and Treaty rights.

She attended law school at Osgoode Hall with former Ontario Court of Appeal Judge Harry LaForme. They were the only two Indigenous students at the law school.

After attending law school, she continued to advocate for Indigenous Peoples, including legal action on behalf of Anthony O’Brien “Dudley” George’s family – an unarmed activist who was killed by an OPP officer during the Ipperwash Crisis. The public inquiry led to the creation of the Ministry of Aboriginal Affairs in Ontario.

In 2004, the Indigenous Bar Association designated Delia a member of the Indigenous Peoples Council (IPC), the highest honour our organization confers. Delia is an Indigenous Legal Warrior in the truest sense and we are pleased to acknowledge her deserving receipt of this recognition.

The permalink for this story is:
https://nationtalk.ca/story/the-iba-congratulates-delia-opekokew-on-being-awarded-an-honourary-doctorate-from-the-law-society-of-ontario