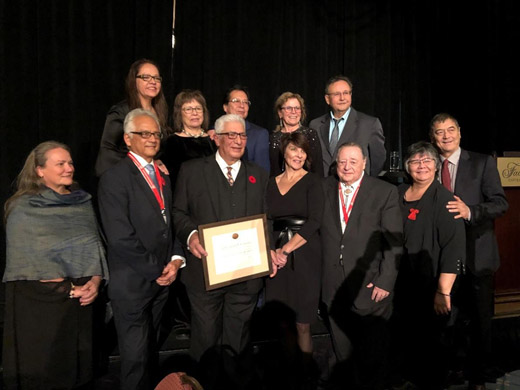 OTTAWA, ON – The Indigenous Bar Association in Canada (“IBA”) is honoured to designate Justice Leonard (Tony) Mandamin as a member of the Indigenous Peoples’ Counsel (“IPC”) at our 31st Annual Conference in Ottawa.

Justice Mandamin is an Anishnawbe member of the Wikwemikong First Nation located on Manitoulin Island, Ontario and was called to the Alberta Bar in 1983. As a lawyer and advocate, Justice Mandamin vociferously argued for the recognition and protection of aboriginal rights. Most notably, Justice Mandamin appeared as counsel before the Supreme Court of Canada (R. v. Badger), before the

Saskatchewan Court of Appeal (R. v. Wolfe), and before the Indian Claims Commission (representing Cold Lake First Nations re: the Primrose Lake Air Weapons Range). From 1999 to 2007, Justice Mandamin served as a Provincial Court judge in the Calgary Criminal Division of the Provincial Court of Alberta. He also presided over the Tsuu T’ina Court which was a First Nation peacemaker justice initiative, and over the Siksika Court, an initiative involving traditional aboriginal mediation, both of which were the first of their kind in Alberta.

Continuing with his advocacy and leadership, Justice Mandamin has served as a distinguished advocate for many Indigenous organizations, including as legal counsel for the Indian Association of Alberta, president of the Canadian Native Friendship Centre in Edmonton, Alberta (1990), Chairperson of the Edmonton Police Commission (1991-1995), and as an active member of the Environmental Law Centre.

The IBA is a national non-profit association comprised of Indigenous lawyers (practicing and non-practicing), legal academics and scholars, articling clerks and law students, including graduate and post-graduate law students. Our mandate is to promote the advancement of legal and social justice for Indigenous peoples in Canada and the reformation of laws and policies affecting Indigenous peoples. For more information please visit www.indigenousbar.ca.

The permalink for this story is:
https://nationtalk.ca/story/the-indigenous-bar-association-designates-justice-leonard-tony-mandamin-as-a-member-of-the-indigenous-peoples-counsel