The Indigeous Bar Association Is Honoured To Designate Romeo Saganash as Honourary IBA Member at Our 31st Annual Conference in Ottawa, Ontario

The Indigeous Bar Association Is Honoured To Designate Romeo Saganash as Honourary IBA Member at Our 31st Annual Conference in Ottawa, Ontario 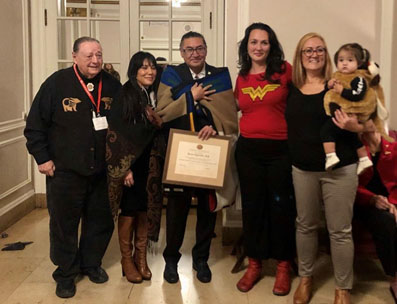 OTTAWA, ON – The Indigenous Bar Association is honoured to designate Cree lawyer, diplomat and outgoing Member of Parliament, Romeo Saganash as an Honourary Member of the Indigenous Bar Association at our 31st Annual Conference in Ottawa. He was nominated by IBA members Sakej Henderson IPC, Brenda Gunn and Naiomi Metallic in recognition of his outstanding achievement in law and politics.

Mr. Saganash was born on October 28, 1961, in the Cree community of Waswanipi. At the age of seven, he was taken from his family to attend and graduated from French-language residential schooling. In 2013, he shared his painful experience at the Truth and Reconciliation Commission. He overcame racism, disrespect, and marginalization to become the first tri-lingual lawyer in Canada—he is fluent in Cree, French and English. In 1984, he joined the delegation of the Grand Council of the Cree to the UN Working Group on Indigenous populations to assist in drafting the proposed declaration on the rights of Indigenous peoples. For the next 23 years, he would be involved with the passage of the UN Declaration on the Rights of Indigenous Peoples.

Mr. Saganash attended law school at the Université du Québec à Montréal and in 1989 he became the first Cree to receive a law degree in Quebec. From 1990-1993, he served as the Vice-Grand Chief to The Grand Council of the Crees of James Bay, a national council that represents nine different Cree communities. From 1993-2003, he became the Grand Council’s director of Quebec relations and international affairs. He worked in the private section with Creeco Inc. and Eeyou Co. to balance the duty as stewards of the land with sustainable economic growth. He was involved in negotiations that led to the signing of the La Paix des Braves (Peace of the Brave) agreement on 7 February 2002, between the Quebec government and the Grand Council of the Crees.

Mr. Saganash was elected to Parliament in 2011 from Abitibi-Baie-James-Nunavik-Eeyou, the largest riding in Canada. He was the first Indigenous candidate to run for the leadership of a major political party. He has been the NDP deputy critic of Intergovernmental Aboriginal Affairs, critic for Reconciliation and Canadian Northern Economic Development Agency. During his time in federal politics, he was the first to speak the Cree language in Parliament asserting it as his constitutional right before the House Procedure and Affairs Committee, he challenged the Canada Day celebration as 150 years of cultural genocide, he pushed for a residential school apology from the Pope, and challenged the federal government and provinces to seriously examine the allegations of the forced sterilization of Indigenous women, among many other things.

Mr. Saganash has been a leading force for the domestic implementation of the UN Declaration in Canada. Since his election, he has been pushing to make the UN Declaration part a clear part of Canadian law. He challenged misconceptions seeded by the former government about the UN Declaration and solidified its importance as the premier international guide detailing how governments should respect the rights of Indigenous Peoples and fulfil other international commitments Canada is already obliged to uphold. When the Liberals fully supported the UN Declaration without qualification in 2016, Mr. Saganash introduced his remarkable private member’s bill C-262 to ensure that Canada’s laws were harmonized with the principles of the UN Declaration. In July 2018, the bill passed the House by a vote of 206 to 79; but it was stalled on the Order Table in the Senate in 2019. The Government has promised to reintroduce this bill in the next Parliament.

The IBA sincerely thanks Mr. Saganash for his work as a tireless and effective advocate for human rights and reconciliation.

The Indigenous Bar Association is a national association comprised of Indigenous lawyers (practicing and non-practicing), legal academics and scholars, articling clerks and law students, including graduate and post-graduate law students. We are mandated to promote the advancement of legal and social justice for Indigenous peoples in Canada and the reform of laws and policies affecting Indigenous peoples. For more information please visit www.indigenousbar.ca.

The permalink for this story is:
https://nationtalk.ca/story/the-indigeous-bar-association-is-honoured-to-designate-romeo-saganash-as-honourary-iba-member-at-our-31st-annual-conference-in-ottawa-ontario