How one teen’s letter helped give ‘voice’ to MMIWG 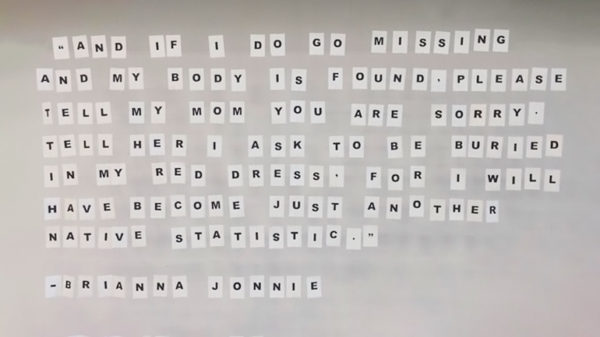 Brianna Jonnie had no idea that a heartfelt letter she wrote three years ago would transform her life and community in remarkable ways. In fact, the passionate words that Jonnie wrote when she was only 14—and her continued social activism—would also help her secure a coveted 2019 TD Scholarship for Community Leadership.

At the time, Jonnie (now 17), sent a letter to political, social and community leaders, imploring them to do more to bring attention to missing and murdered Indigenous women and girls (MMIWG), and to help create more visibility around the issue. According to the 2017 findings by Statistics Canada, Indigenous women reported experiencing violent victimizations at a rate 2.7 times higher than that reported by non-Indigenous females, while the 2019 national inquiry report titled ‘Reclaiming Power and Place’ found Indigenous women and girls are 12 times more likely to be murdered or go missing than any other women in Canada.

“Watching the news, seeing what was going on in the community, I saw the differences between how Indigenous women were treated when they went missing versus non-Indigenous women,” said Jonnie, a Winnipeg, Manitoba resident from Roseau River First Nation.

“I wanted to give all those who had gone missing a voice. We all needed to feel like we were being heard.”

And give them a voice she did. After being saddened by news accounts of the missing and murdered women, Jonnie wrote a letter to authorities instructing them what to tell her family and what to do with her body should she be murdered. The letter and her plea for more attention on the issue was impactful—compelling community leaders to create new initiatives across the region to foster better relationships with First Nations groups.

“I never expected my letter would have the impact that it did,” said Jonnie. “Suddenly I was meeting with the [former] chief of police and the mayor. I learned what I could do to help my community. I even heard from people who had missing family members or friends, thanking me for voicing my opinion and standing up for something because they felt they couldn’t. It was incredible.”

The realization that she could make such a positive difference in her community led Jonnie to volunteer with programs focused on issues affecting youth and females such as Teen Talk and Strong Girls, Strong World. Through this work, Jonnie taught young adults how to improve their decision-making skills and foster healthy relationships. She continues to encourage young people to empower themselves to make a difference in society.

“I believe that if there’s something that you feel strongly about, you need to go for it,” she said.

It was that mindset—along with the encouragement of her mom and school guidance counsellor—that pushed Jonnie to apply for the TD Scholarship for Community Leadership. The scholarship, which is awarded to 20 students across Canada every year, honours leaders who demonstrate an exceptional commitment to improving their community. Valued up to $70,000 CAD in tuition and living expenses, the recognition prioritizes students who show a remarkable dedication to making an impact, and also includes paid summer employment at TD, mentorship, and networking opportunities.

“I first learned about the scholarship at school and I thought it was amazing that there was a grant that supported kids who were trying to make a difference in their community,” said Jonnie. “It’s so humbling and such an honour to be chosen.”

Jonnie, who is majoring in biochemistry, says the scholarship will help make her goal of becoming a surgeon a reality.

“The scholarship really makes it easier to pursue the things I want to do and allows me to work toward being the best person I can be,” she said. “I’m driven to keep working on creating positive change in my community.”

The permalink for this story is:
https://nationtalk.ca/story/how-one-teens-letter-helped-give-voice-to-mmiwg